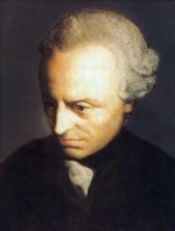 The German philosopher Immanuel Kant lived from April 22, 1724, to February 12, 1804. Kant stayed in and near his hometown of Königsberg for his whole life. Most people regard Kant as the last major philosopher of the enlightenment and as one of most influential European philosophers. Kant's philosophy significantly impacted the Idealist and Romantic philosophies throughout the Nineteenth Century.

By the time he turned 46, Immanuel Kant had grown into a reputable scholar and an progressively more influential philosopher. However, Kant than took an 11 year break in which he did not publish any new works. He spent this time silently working on a solution to various philosophical problems, namely about the relationship between intellectual and sensible faculties. Despite his liking of conversation and company, Immanuel Kant isolated himself, even after his friends tried to get him out of his seclusion.

In 1781, Immanuel Kant came out of isolation with his new book, Critique of Pure Reason. The public mostly ignored the book initially, but the book later gained its current recognition as one of the greatest philosophical works ever. In 1787, Kant released a second edition of the Critique of Pure Reason. In the new edition he greatly revised the first sections. Kant continued to work in philosophy, with his ensuing work focusing on different areas of philosophy.

The work of Kant acted as a bridge between the 18th century Empiricist and Rationalist traditions. He had a decisive impact on the Romantic and German Idealist philosophies of the 19th century. His work has also been a starting point for many 20th century philosophers.

The philosophy of Kant describes human understanding as not only established by experience, but also established by a priori ideas. That philosophy critiqued rationalist philosophy in a non-empiricist way, which Kant and others referred to as Kant's "Copernican revolution."

Theologically speaking, Kant claimed that one cannot know whether or not a god or afterlife exists, due to the reason's limitations. Even though they cannot know for sure, Kant considered people's belief in god and afterlife as reasonably justified for practical purposes, namely because he believed morality and society depending on the idea of god.

Overall, the work of Kant has drastically influenced Western thought. His contemporaries paid much attention to his thought, especially in the later part of his life. While much of the attention came from critics, he also positively influenced many late Eighteenth Century philosophers, such as Fichte, Hegel, Schelling, and Novalis. The philosophical movement referred to as German Idealism originated from the practical and theoretical writings of Kant. Nowadays, many people revere Kant, usually considering him one of the greatest philosophers to date.

We hope this article answered all of your questions about Immanuel Kant. If you have any remaining questions, or if you have any comments or suggestions, please post them in our Philosophy Forums.