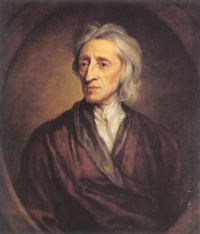 The British philosopher John Locke lived from August 29, 1632 through October 28, 1704. John Locke started British Empiricism and also laid the foundation to social contract theory and the modern concept of natural law. His work in philosophy greatly influenced epistemological and political philosophy. Many people regard Locke as the most influential thinker of and contributor to the Enlightenment. The writings of John Locke influenced Immanuel Kant, David Hume, Jean-Jacques Rousseau, Voltaire, and many others including many Scottish Enlightenment thinkers and also the so-called founding fathers of America. The American Declaration of Independence echoes philosophical ideas of John Locke.

John Locke greatly influenced not only philosophy, but also politics, especially on liberalism and libertarianism. His contentions regarding the social contract and liberty inspired the writings of Thomas Jefferson, James Madison, Alexander Hamilton, and other Founding Fathers of the United States. Moreover, his philosophy helped spark the French Revolution and the American Revolution.

John Locke may have had an even greater influence in epistemology. Many people, including intellectual historians like Jerrold Seigel and Charles Taylor, believe that John Locke's theory of mind began modern conceptions of 'self' and identity. Many philosophers incorporated those ideas, namely Kant, Hume, and Rousseau. John Locke defined the self by a continuity of consciousness. John Locke also proposed that the mind starts as a "tabula rasa" or "blank slate," which opposes the Christian and Cartesian belief that people have innate ideas. Locke's ideas redefined subjectivity.

Critics point out that John Locke invested in the English slave-trade through the Royal Africa Company. Also, Locke helped draft the Fundamental Constitution of the Carolinas, which created a feudal aristocracy and left slaves under the complete control of their masters. Beyond that, some people believe that Locke's statements regarding unenclosed property helped justify the Native American displacement. These critics often accuse him of hypocrisy, since his major writings oppose slavery and aristocracy.

John Locke claimed that one creates ownership of property by applying labor to it. (Take, for example, someone who built a car by themselves.) Furthermore, John Locke believed that property preceded government, and for that reason he said that governments cannot "dispose of the estates of the subjects arbitrarily." In his own social theory, Karl Marx argued against John Locke's theory of property.

Locke viewed tolerance and reason as typifying traits of human nature, but Locke also thought that human nature let men act selfishly. The introduction of currency made that apparent. John Locke considered people to be naturally independent and equal, which to him meant that nobody had the right to harm another person's "life, health, liberty, or possessions."

John Locke encouraged governmental checks and balances. He also viewed political revolution as not only a right but also in some circumstances and obligation. In the United States, those ideas helped inspire and form the Declaration of Independence and the Constitution of the United States.

Generally, John Locke's theory of price and value is a supply and demand theory.

Locke differentiates between two roles of currency. Firstly, it acts measures value as a "counter." Secondly, it lays claim to goods as a "pledge." For international transactions, Locke views gold and silver as the appropriate type of money, not paper money, because gold and silver have equal value by people all over the globe, while local governments control and honor paper money.

While Locke said that labor creates property, he also said that the accumulation of property has limits. He pointed to man's capacity to consume, and his capacity to produce, as those limits. John Locke viewed unused property as a waste and as an offense against nature. However, he made an exception for money, because money does not lose value. In other words, money allows a person to retain possession of the value of their labor without wasting it.

Any Questions about John Locke?

We hope this article answered all of your questions about John Locke. If you have any remaining questions, or if you have any comments or suggestions, please post them in our Philosophy Forums.